“The King’s Mate” is a round for four voices which uses punning and metaphor to refer to the medieval game of chess. Rounds are a form of secular polyphonic music originating in the 13th century, and like much of medieval popular music, they often feature wordplay. My lyrics pun on the names of various chess pieces, which correspond to positions in a royal court, thus describing the movements of these chess pieces through a narrative of human characters.

My intent is to imitate the style of early 17th century English rounds, like those published in Thomas Ravenscroft’s Pammelia in 1609. I have used Modern English for ease of comprehension, but have avoided anachronistic terms, and employ word‐painting1 as is often found in Renaissance compositions.

The earliest extant example of a round is “Sumer is icumin in2” from mid‐13th century England, referred to in the manuscript as a rota; rounds were one of the earliest forms of polyphony that developed in Western Music, part of a surge in the development of secular music and in part music as a whole. Polyphony is typically referred to as ‘counterpoint’ in late Renaissance and Baroque contexts (Hughes 402). Rounds use a type of polyphony known as ‘interchange,’ in which two or more melodies are traded between parts, so that each part performs each melody at different times. A simple example of interchange is two melodies, A and B, in which Part I performs AB as Part II performs BA. In later music, this interchange is more commonly referred to as ‘canon’ (Hughes 374). Rounds are sometimes called ‘infinite canon’ due to their potential for infinite repetition; a single part typically begins the ordered string of melodies alone, and all other parts follow with staggered entrances, so that with repetition all parts overlap in a cycle. This looping quality is what gives the form its early name, rota, from the Latin for ‘wheel’ (rota, n.), and the later term ‘round.’3

My round adheres to this definition, consisting of four distinct melodies, which differ in rhythm but are harmonically related to form chords, interchanged between parts to form an infinite canon. In performance, vocalists should enter on the first part as the vocalist ahead of them begins the second part, then sing through the entirety of the song for as many repetitions as are desired.

Chess was most certainly being played in England as early as the beginning of the 11th century; King Canute even played a game in 1028 that ended with the order for his brother‐in‐law’s execution (Forbes 223). The game was most likely introduced via Anglo‐Saxon contact with Scandinavia, with ancient origins, traceable back to 6th century India (Forbes iii), but it did not develop into the modern form until circa 1475 (Hooper 255).

The bishop, he is out of sorts; he’s running all around, around,
A-­searching for the wayward queen who recently he crowned, he crowned!
She’s off courting a handsome knight; she’s chasing him around, around;
The king sees all, but does not stir until his mate is found, is found.

The ostensive narrative is that of a bishop in pursuit of the missing queen, who is herself in pursuit of a “handsome knight,” while her “mate,” the king, does nothing to aid in the search; this plot gently mocks the theme of courtly love4 by depicting a lustful queen pursuing a reluctant knight, rather than being the object of his adoration. It also alludes to the tradition of coronations being performed by bishops, and to the clergy being the guardians of morality (note that it is the bishop who frantically searches for the wanton queen, not her husband). The narrative implied through puns & metaphor is that of chess pieces and their respective movements on the board. The first line describes the bishop piece as “running all around,” referencing the bishop’s ability to travel great distances across the board quickly, as it can move an unlimited number of spaces in any direction diagonally. Line 3 describes the queen as “courting” the knight, and “chasing” that piece; as the knight piece is very limited in its possible movements, only able to move in the characteristic ‘L’ shape, and the queen piece may move an unlimited amount of spaces in any direction it chooses, it is quite easy for the queen to give chase. However, it is also possible for the knight to move out of the queen’s path safely, thereby staying out of reach.

The final line describes the king piece, which moves only one space at a time: in this narrative, the king never moves, until it is put into check mate, ending the match – a not uncommon scenario when playing. In addition to the chess‐related puns (king, queen, knight, bishop, and mate), lines 1 and 3 repeat the word “around,” punning on the song itself (a round).

I have used word‐painting both in my rhythms and my pitch progressions to evoke the various chess pieces’ movements; the word “running” in the first line contains several short notes, in contrast to the sustained notes found in earlier measures, giving a sense of speed, while these short notes makes relatively large interval leaps to give a sense of rapid change of direction. The same methods are employed in line 3 for the word “chasing.”

In line 4, the pitch does not alter through the initial measures, changing only when it reaches the word “mate,” so that just as the king does not move until “his mate is found,” the melody does not move until that point of the narrative. Additionally, the word “crowned” in the second line jumps to a high note, giving a sense of elevation in allusion to the crown being raised and placed on the head of the queen, as well as the figurative elevation of the queen herself. Below is an example of an early 17th century round, of the style I am emulating; “Hey downe a downe5” is found in Thomas Ravenscroft’s 1609 publication Pammelia, and like “The King’s Mate,” it is written for four voices and employs simple rhythms. Each iteration of the phrase “downe a downe” uses word‐painting, with the notes descending in pitch as if moving downward. 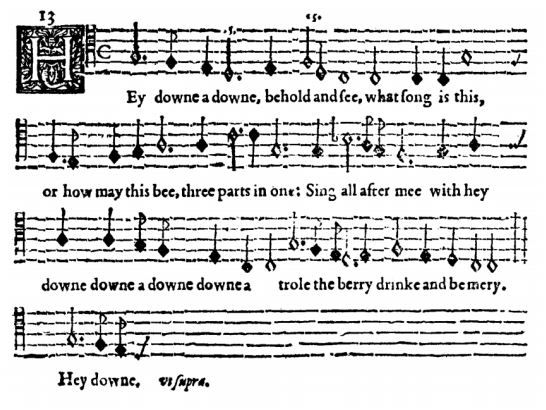 1 Word‐painting is the practice of composing music in such a way as “to match the expressive or physical aspects of texts in their music” (Whitall). See page 5 for more detail.
2 Also known as the Reading Rota (Hughes 402).
3 In Pammelia, songs of this form are referred to as rounds, roundelays or catches (Ravenscroft).
4 Courtly love “strongly influenced medieval culture… as a major theme in lyric poetry and romance from the beginning of the twelfth century” (Lindahl 189).
5 Facsimile of original manuscript found at http://www.pbm.com/~lindahl/ravenscroft/pammelia/all.pdf

© 2015 Kathryn Pickett. All rights reserved. Limited publication rights may be granted upon written request to the author.